I’m not sure why I’m surprised it’s December already, but I am! Thanksgiving holiday turned into a longer weekend than we thought after a huge storm dropped lots of snow, and school closed for two days. Usually the first snow seems to melt off pretty quickly, but this snow isn’t going anywhere soon. After walking on the road for a few days, I finally dug the snowshoes out and headed to the river trails. This morning was cold and crisp, but nothing a little snowshoeing won’t fix. Good snowshoeing depends on the snow, it should be deep yet have some structure. I’m relatively new to it, and find that sometimes it’s more work than it’s worth. Today it was worth it. 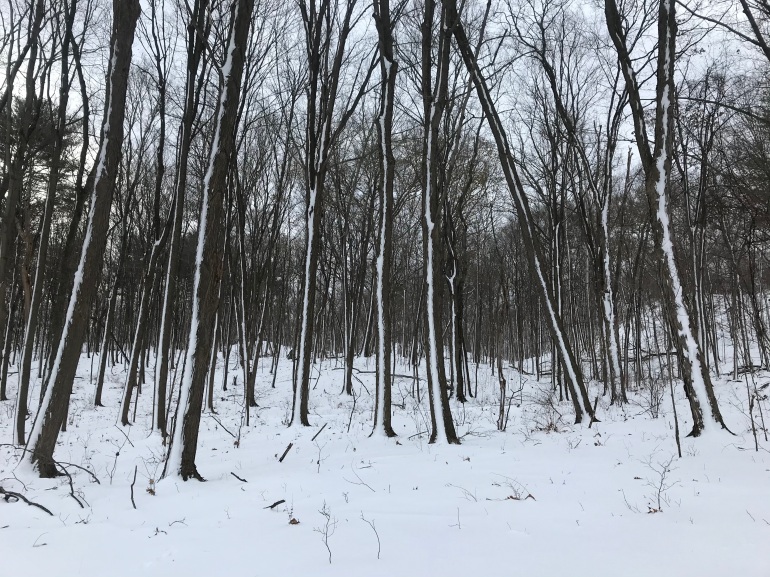 The river looks like brushed steel, and mostly everything else is white, including the sky. Even the trees all have a line of snow up their trunk if you are looking south. I guess the wind was coming from the north. The snow reveals how much animal traffic there is. One other human. Lots of deer with their dragging legs. Lots of canine prints, are they dog? Fox? I can’t tell the difference between them honestly. I am focusing on the walk, the poles which need to be adjusted, the shoes which I have to get into the rhythm of using. There’s a big steep hill, but I find out that going up is a little easier than going down. The sky is a sullen gray and almost matches the snow. There are tawny brown oak leaves scattered everywhere, either laying on top of the snow or pinned down by a layer of white. Some of them have green spots. It’s the only color out there.

I am so glad to be back in the woods. There is no one else in the parking lot but me, which is not so odd for a Wednesday before noon. A flock of crows is gathered by the scraped up bermes of plowed snow, while little sparrows jump around the branches that jut out of the river. Sometimes the best part of walking is when you stop. My face was burnished with cold, but my neck was hot under the wool scarf. It always makes me feel better prepared for life.