Yesterday, I was able to steal away by myself for two hours in the morning. With those two precious hours, I went to a hemlock and mixed woods forest so that I could walk. Maybe ten minutes in my shoulders softened and my balance evened out, and I felt I could breathe again. I went in thinking about how I needed to escape the living world, and I went out feeling that I never wanted to leave it. That is what walking means to me.

I walked along the path under the now naked trees, kicking the leaves, beech and oaks among them, just like how I did when I was a kid along suburban streets. The sound is very satisfying with newly fallen leaves, crunchy and loud, yet there is a soft whisper to them as well. The sun was out even though it was still below 40 degrees, and it slanted onto the ridge I walked along, warming my walk. The path wound through tree trunks and over branches, and as I followed it I thought of many things, mainly untangling the threads of stress in my life so they became more manageable. I also thought about the people who had walked here before me: naturalist John Burroughs, poet Walt Whitman, activist Soujourner Truth, and I imagined the Esopus People, a native American tribe, who I always think of when I walk this area. Was that large pile of rocks an old burial mound? Or just a pile of rocks pulled from the ground by Dutch farmers?

I climbed down the large ladder built to climb a rocky ledge, and looked back at it, admiring the idea of a ladder in the woods. So human, somewhat absurd (especially since you could walk around it ten feet to the right or left), but something about it was comforting. Something was helping you out there in the woods. Not far from the ladder were other older touches of human hands–a small building foundation, about ten by ten feet, densely packed thin rocks forming walls and an opening. Also a rock lined well of some sort, looking vaguely dangerous. I peered in not wanting to get too close to the edge lest I fall in. I looked along the path, an old road, and saw the ruts where wheels would roll, and tried to picture how it looked a hundred years ago when there was a factory by the falls, which is now all woods. As it should be.

I walked to the water, where it pours sinuously from a wetlands into a rapids. My eyes are always amazed at how black the water looks as it glints in the light–why indeed, its very name is Black Creek. Then the water turns creamy yellow as it is forced into a tight rocky chasm for about a hundred feet until it gets to another placid pond. The old foundations still exist: signs of an old bridge, an old factory, all carefully placed rock, still sturdy despite the hundred or so years of pounding water and contracting cold and heat. I got lost in the sounds of the thundering water–the sound calibrates my internal organs in some way, just as the trees and the walking is an adjustment to my spirit. It allows me to walk back out into the world. 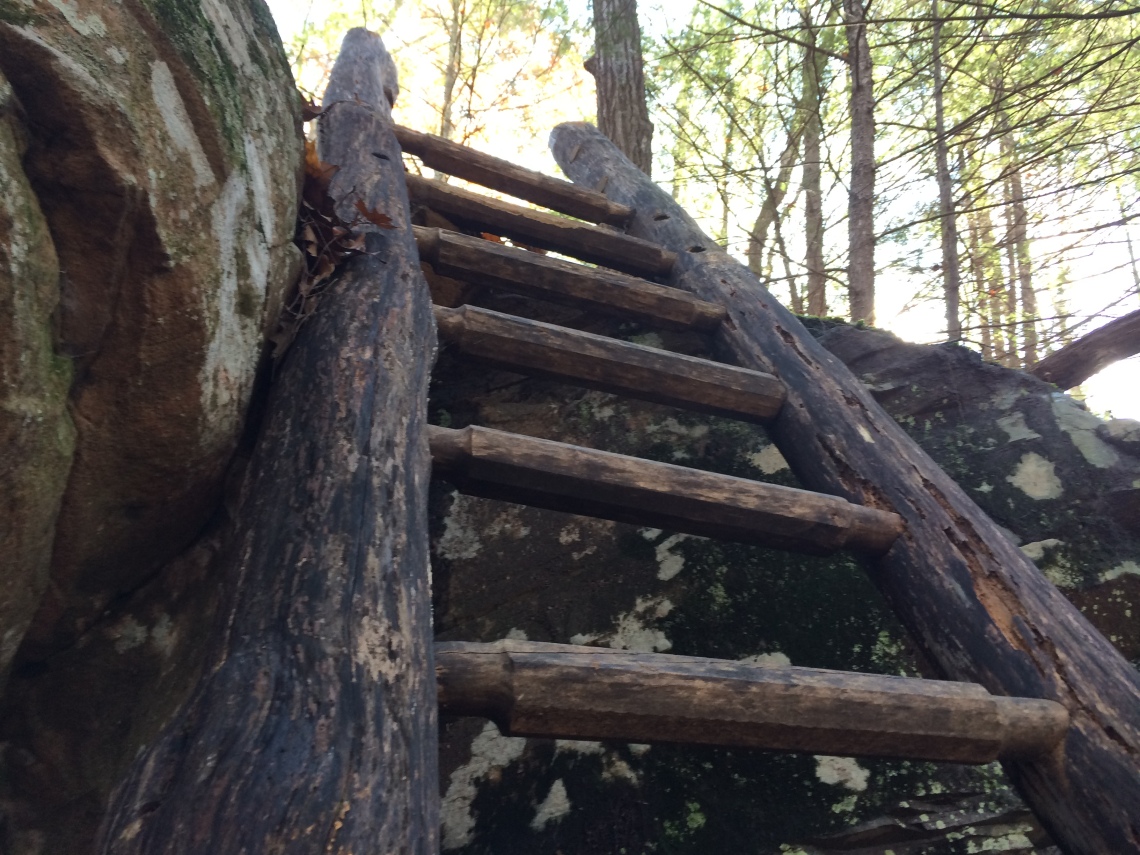