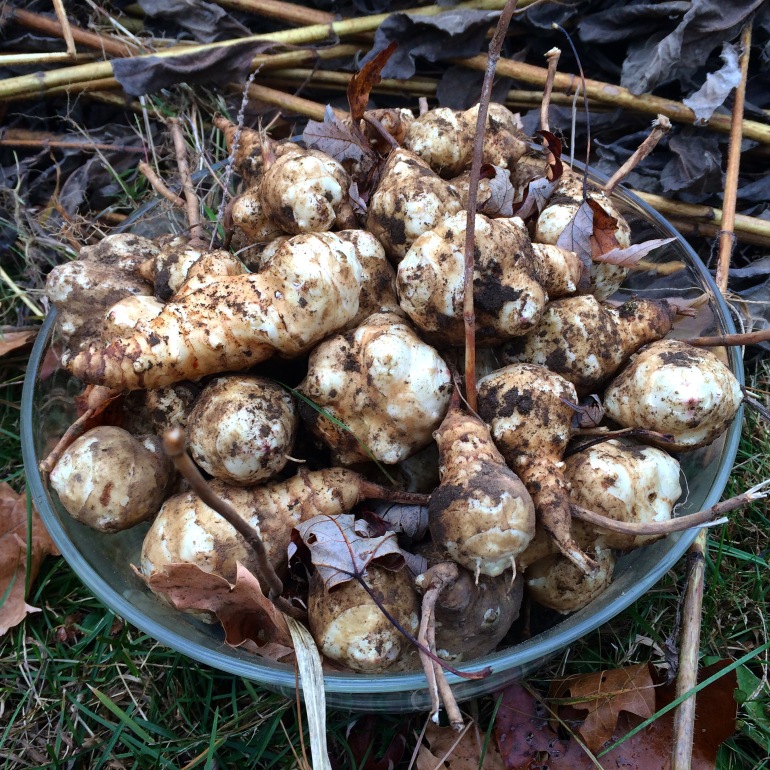 Last week the house was filled with the smell of quinces. It is a smell with a strong presence, floral and fruity. I was making lots of jam and jelly with that box of quinces I posted two weeks ago, and that smell and it’s rosy hue has put me in a good frame of mind. The porch is also putting me in a good frame of mind, as it’s doubling as the walk-in fridge now that it’s getting colder. I only get this option for a few weeks until it becomes too cold to leave anything out there. For now it’s like a grocery store: there are still apples, a small bowl of quinces, celery root, jerusalem artichokes, potatoes, onions, and squashes. Some will keep longer than others, like the squashes, and some will go quickly–like the jerusalem artichokes, also called sunchokes. I’m afraid I neglected them in favor of the quinces. Now it’s time to get to them, as they don’t keep long once harvested. Because of this I usually harvest half of the crop, then a few weeks later I harvest the rest.

Jerusalem artichokes are that wondrous crop that takes absolutely no effort for consistent harvests year after year if you have them in a nice sunny spot. They are also beautiful, tall and graceful with sunflowers that bloom at the end of summer into fall. No work at all. Just plant them and every year after that you can dig them out and eat them. That is, if your digestive system allows it. You don’t want to overindulge with sunchokes.  I might try this fermented Jerusalem artichoke pickle from Linda Ziedrich, which is also an amusing read on the indiscretion of this particular tuber. Some people do think that fermenting makes them easier on the digestive tract. Also low and slow cooking seems to help some people.

The other day I slow roasted a bunch in a pan with a whole chicken and they came out amazingly savory with a touch of sweetness, their outsides get crisp and the insides turn to creamy pudding. Cooking them long and low seems to inhibit the concentration of inulin, thereby creating less gas in the digestive tract. (Or that’s what some people say.)  There were a few roasted chokes left, along with parsnips, potatoes, onions and excellent chicken stock. Cooked up and then pureed, it turned into the best creamy and velvety soup.

I’ve started a celery root and Jerusalem artichoke kimchi, inspired by the book Fermented Vegetables and the recipe they shared from Cultured Pickle Shops. The original recipe is for Fennel and Sunchoke, so I’m looking forward to seeing how this comes out. How about jerusalem artichoke kraut, I wondered? I thought once grated, and fermented, they would stay a long time and be perfectly suited to become delicious fritters. I’ve only fermented them in thin slices before, and I feel that grated might be easier to incorporate in recipes. There was some dill in my fridge that needed using up, so I threw that in as well. I’ll check back here with an update on how they taste, but I will write down the recipe here if anyone out there happens to have some Jerusalem artichokes that need eating up!

3 pounds of cleaned, grated jerusalem artichokes (I do not peel them)

2 tablespoons of salt (sea salt is fine, but I use canning salt)

about a handful of dill, chopped coarsely

Grate all the chokes, put them in a bowl and sprinkle them with the salt. Mix with your hands, squeezing the mixture, adding in the dill. Let sit for a few hours to let the liquid collect. Pack tightly in a half-gallon jar which just fits it all in and cover with whatever it is you use for fermenting, in my case a smaller jar that fits in the wide mouth of the mason jar. In my case there was not enough liquid to cover the mixture properly, so I made a brine of one quart of water with 1 1/2 tablespoons of salt and once the salt was dissolved I used it to cover the kraut. Once the bubbling subsides, I will taste it to see if it’s ready. It might take anywhere from 2 to 4 weeks.