Next year will be the tenth year living at our house. Since then a lot has changed on our three aces.  One of the things I was most excited to do on moving in was to plant fruit: trees, bushes and canes. Being the somewhat rash person I am, I jumped in and became overwhelmed. It didn’t help that I had a baby in the middle of it all, so now, years later, I’m surveying it all and wondering how to fix the mess. I never thought how much work would be involved with taking care of three acres! And I never realized how much work growing fruit could be.

To be fair, some things have worked out beautifully, like the strawberries I received for free from a neighbor that have consistently produced each year. And some things have not been so, umm, fruitful. This post started out as a quick tour and ended up being a comprehensive listing. My apologies if it’s a tad dull! I also might add, I feel quite embarrassed by the long list of plants I have killed. It makes me feel like a horrible gardener. But, there’s a lot to learn with plants, especially fruit plants, so I’m guessing I’m not the only who has had left a trail of foundering plants in their wake. The biggest lesson I’ve learned from this is making sure the plants are in a good location. If they aren’t doing well, move them!

Without further ado, here’s a list of all the fruit I have planted. (And if you feel so inclined, tell me what you have planted! What has been most successful? What has failed?)

Apple: I have two apple trees: a Liberty that seems to be doing well (I have harvested exactly one apple), and one Esopus Spitzenberg (I live in the town it was developed in so long ago, Esopus) that was sent to me last year and never developed one leaf. There are also two crabapple trees, but I think they are ornamental.

Blueberry: I have three blueberry bushes, two are new and one is a poor old guy that I planted in a stupid place years ago. Now they are all together in a sunny, well-drained spot. Now all I have to do is test the soil and check the acidity. I’m sure I’ll have to amend the soil for these acid-loving creatures as my property is very alkaline.

Cranberry: I have one cranberry plant, poor thing, that my mom sent me. It’s next to the lingonberries. I don’t know what to do with it! Also, I planted several American Cranberry/Viburnum that I bought at a library sale. They all have seemed to die. These are gorgeous plants that I really would like to grow successfully for their stunningly red clusters of fruit. I’m not sure why mine didn’t survive, as they are a native species. Sometimes it’s the stock you get; these were such young plants given out for free. I might be better off spending more and getting stronger plants.

Currants: Every year I move quite a few plants around. It might seem crazy to a non-gardener, but a plant is going to be happy you ripped it from the ground it if it’s not in a good place. I just moved my three Red Lake currant bushes into a sunnier spot. I’ve found that even if something will tolerate shade, that doesn’t mean they wouldn’t be happier somewhere warmer.  I used to be so keen on filling up the shady spots, that I was putting things in unsuitable spots. The red currants already look much happier. They are good producers. I can’t wait to see what they’ll do in a sunnier spot!

Elderberry: After some trial and error, I found out that elderberries really like living down by our pond. They are making lots of baby plants, and I am encouraging them by cutting back the red osier dogwood that likes to bully its way in. “Elderberries like their feet in the water and their heads in the sun,” so they have the perfect home now. Now, if it’s a good harvest year, I can be sure to have enough berries to make elderberry syrup for our winter, and keep the flu at bay.

Gooseberry: I just bought two Hinnomaki Red gooseberry plants. They are said to have very good flavor. I am going to treat them very well!

Grapes: I planted red table grapes, Reliance, a few years ago. I have them on a rocky slope that probably gets too much shade. I think I’ll be moving them soon. I’ve never seen one grape. There’s a lot of pruning involved with grapes, which I’ve never done. The problem with the grapes? They are in a far corner of my oddly shaped property, which means I never pass them. It’s good to have your plants close to you, so you see them all the time. This is a big lesson my mother also tried to teach me: plants like to be together! They don’t really like being alone and uncared for. Makes sense, right?

Jostaberry: Also on the sunny slope are four new jostaberry plants, which are a cross of currants and gooseberries. They are said to be very hardy and disease resistant. I am really excited for these to produce. I’ve never tasted one! They were planted last year, and so far seem to be very happy. They are full and leafy, and there are more than a few blossoms.

Lingonberry: These are recent additions. I believe I planted them in a good place. I wasn’t sure where they would be best suited, so I put them close to the house in a sunny spot to see what they would do. I still might move them. Last year they bore a ton of fruit, but they came flowering so we’ll see what happens this year.

Figs: At one point I had about eight small fig trees! But slowly they have been dying off. I have two left, from one large plant I received for free that had a bad bug infestation. I always think the winter kills the little trees, but then they come back, though slowly. These are container plants. Having a fig tree in this cold area is not impossible, many people do it. But, there’s a lot of extra care that needs to happen that I’m afraid I have not provided. Bad gardener!

Filberts: Not fruits, of course, but still. I bought these from the Arbor Day Foundation many moons ago. Of course I put them in a poor spot, and they need to be moved.

Mulberry: A white mulberry tree that I left because they are fun to climb. I don’t think I could kill this tree if I tried. Wish it was a black mulberry because those are so much sweeter and juicy.

Plums: My two Green Gages are dying of black knot rust. They are my oldest trees, and it’s so sad. Do I pull them? Or try to save them? Fruit trees are so much work. I hope you thank your orchardists every time you enjoy delicious local tree fruit, because those people work hard for that bounty. Especially if it’s organic fruit. It is not easy. In fact, the more I learn about fruit trees the less I want them. I think I have two other plums (or apricots?) growing by the grapes, but I am not sure. What was I thinking?

Quinces: I have two quince trees that seem to be the happiest of the trees. I have gotten blossoms and have seen little quinces, but they’ve never grown to full size. Fingers crossed for this year.

Raspberries/Blackberries: I have planted many canes, mostly raspberries, and I think I only have a few left.

Rhubarb: Also on the sunny slope, the rhubarb that I got for free through an online posting years ago are doing great. Three of the four rhubarb plants were being shaded by a tree, and the difference was obvious. I broke up one crown, and divided it up into six new plants which are now in a better spot on the sunny slope. I’m going for a huge rhubarb patch! And also considering cutting down the tree that’s casting shade on the sunny slope. I never expected it to be so big!

Serviceberry: Also called shadblow, juneberry, saskatoon. When people describe how these taste I wonder why I don’t have rows of them. I forgot I even planted this, a purchase long ago from the extension office. Now it’s in bloom, and perhaps I’ll get a berry or two!

Strawberry: The strawberries are really happy on their south-facing slope. They are all in bloom right now! The strawberries are from a neighbor, and I don’t know what kind they are. They seem to be early-bearers, but aren’t terribly sweet. This year I put in five new plants of Honeoye. We’ll see how they do. The strawberries have consistently been the big producers of all the fruit plants I tend. It always surprises me to see how much they produce: 8 to 10 quarts each season for a small 3′ x 6′ patch. 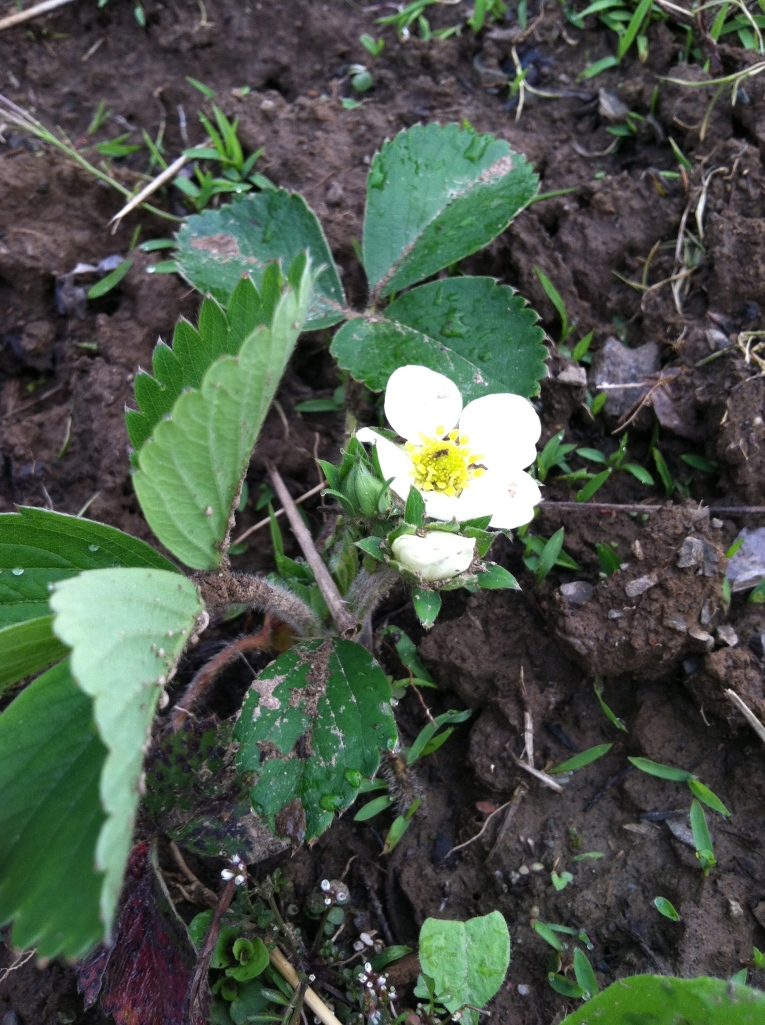