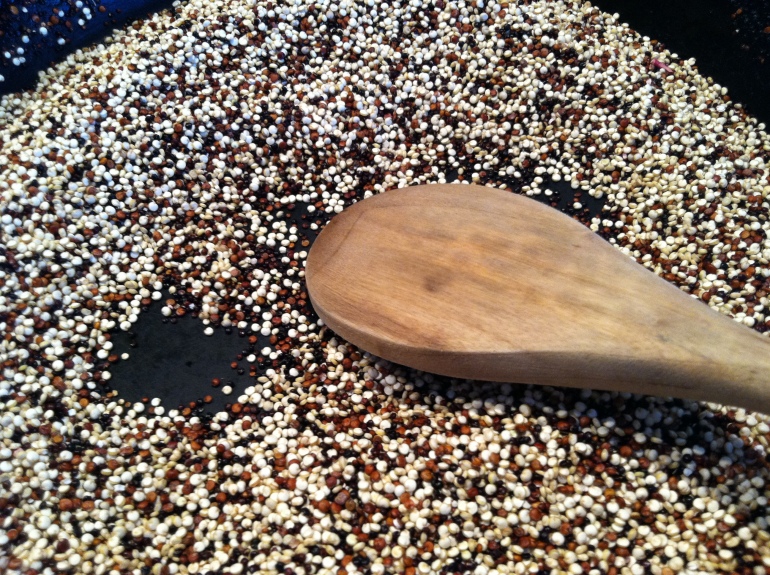 Last week I was all pumped about writing, and now I’m feeling a little less than expansive. I am feeling more writerly grind, than writerly gold, to be frank. Is it the fifty degrees knocking on my window, beckoning me outside? Oh, what will become of my writing habits once the garden has emerged from its snowy cocoon? I fear for my productivity.

In any case, today’s topic is that I’m going to go gluten-free for a few weeks to try it on, and see what I learn. In the few days since I’ve started it’s been pretty delicious and not very restrictive. I made some quinoa flour the other day by toasting some three-color quinoa in a cast iron pan. After letting it cool, I put it in the Vitamix to grind. It turned into flour effortlessly and quickly. The powder was sandy and smelled very much like peanuts. I think next will be to make some buckwheat flour. Yesterday I picked up some buckwheat groats to experiment with making my own flour, but I also grabbed a few pounds of already ground flour.

This afternoon, I made buckwheat crepes following this post from, of course, Gluten-Free Girl. Why haven’t I made buckwheat crepes ever? Silly me. So quick and easy! I stuffed a few with sauerkraut, cheddar cheese and a little crumbled hard-boiled egg. I saved two for dessert, which I filled with coconut spread and nectarine-cherry jam. It was such a fulfilling lunch! I think I’ll be making more of these.

I also made a carrot cake using only the quinoa flour I made. (Slightly digressing: did you know quinoa is considered a pseudo-cereal? I love that.) It’s pretty good, but there is a legume-y taste to it, and a slightly unsettling sandy texture. It is tasty, but the test will be to see if my son eats it. I’m guessing he’ll turn his nose up at it. Good thing I have some raspberry sorbet made for our after school snack!